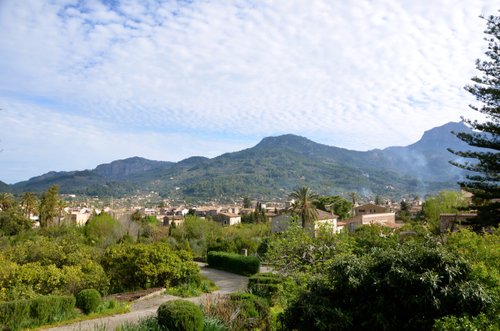 About 40 minutes northwest of Palma lies the beautiful and sunny

Soller valley, or the "Golden Valley", as it is known.

In this wonderful valley we´ve found our second home. It is also here where we go to gather power and energy when the battery light turns red.

Soller valley, with the main town, Soller, is a world by itself with a near subtropical climate and framed by the powerful Tramuntana Mountains, which is unique. Soller and Port de Soller are located below Mallorcas highest mountain range, Puig Mayor.

The picturesque villages of Biniaraix and Fornalutx, which have been selected as the most beautiful and best preserved village in Spain, are within walking distance.

Many spectacular and beautiful hiking trails start in Soller valley.

The most famous is Barranc de Biniaraix, which starts in the small village, Biniaraix.

In the valley there´s close proximity to the sea and the stunning mountains with its beauty and incredible variety of hiking trails, nature, mountain peaks, valleys and infinitely more to filling the mind with.

The valley is called Jardin d'Espagne, the garden of Spain, and here you´ll find the best oranges, lemons and grapefruits in Mallorca.

The terraced orange groves with its amazing irrigation systems, is a legacy of the Arab conquerors, which gave the valley the name Suliar, which means yellow peel.

The valley is not only famous for its citrus groves. It´s also known for its olive groves located in impressive stone terraces created by human power since ancient times. The oldest olive trees in the valley are believed to be over a thousand years. An amazing thought.

The most common tree in Mallorca is the almond tree. Seven million trees grows on the island. Even the Soller valley has had its fair share.

Viewing almond trees bloom with their light pink flowers at the beginning of the year is a fantastic experience.

It was the Arabs who introduced the almond tree on Mallorca. In the year of 903 the moors planted the first tree on the island. However, it is not Arab's merit that there are so many almond trees on the island.

The reason for the large number of trees is wine lice. In 1890 Mallorca was struck by wine lice and only a few years later all grape vines were dead. The peasants had to feed on something else and many of them replaced the wine with almond.

In the late 1800s and early 1900s, many locals drove trade with France and sold oranges, olive oil and textiles via the harbor in Port de Soller.

The people of the Soller valley had very little contact with the rest of the island over the past few centuries. Own port rights from the 16th century created contacts on the other side of the Mediterranean. When there was war and bad times for trade with agricultural products and fruits, the population of the valley became twice as affected. In most families, the young men went to America.

After the first world war, one decided to focus strongly in exports of oranges. The boats went overfilled to Barcelona and to cities in the southern of France. With the oranges followed some men who then remained and created family abroad.

As a curiosity it is mentioned that today, second and third generation fruit traders can be found in both Marseille and Paris.

A large part of the people in the valley speaks French, as the contact now continues with relatives and friends in both directions. A special culture has been created in the Soller valley.

You´ll find a sample of the Soller valley, click here.